The calendar said spring, but the weather was anything but springlike this morning when I headed to pick up Sam for our annual trip to Weldon. The temperature had dropped into the mid 20’s overnight, and was still below freezing when got to Sam’s house. It’s a good thing shad fishing is “civilized” with the bite being largely unaffected by time of day. We figured that by the time I navigated the traffic jam to his house, factoring the 1:45 hr drive to Weldon, we’d be on the Roanoke River by 10:30. And we were, but the temperature was still at freezing when we put the canoe in the river to paddle over to our favorite rock. We portaged the “big rapid” and set up shop at the top of “Little River,” a fork that creates a large island.

There was one boat anchored about 50 yards downstream of our rock, and they were catching fish. That’s a good spot they were in, but in a canoe it’s difficult to anchor and fish in such fast water. The flow was at 7400 cfs, higher than I’d like, but fishable (at that level, a river-knowledgeable captain can take a power boat up the rapids, but I would not want to do it at less than 10,000cfs) . The trick with shad is to find the right seam in the current and the right depth, along with the right color fly and right speed of retrieve…small differences can have a big impact on success. Our position was good, but not ideal given all the variables today. The fish were there, but not in the numbers we’ve seen on some trips. The water was still quite cold due to the late spring.

We started with pink flies and orange flies, but no strikes. We were using intermediate sink tips on 7wt rods. As much as anything, this is because you spend the day making long double-hauls, and it’s just easier with a rod with some body strength. Finally, since we weren’t catching anything, we hollered to the guys in the boat…”what color?” They said green and yellow. Tried that and started catching some fish. The sun went behind some clouds, the wind kicked up and I was seriously thinking about putting on my neoprene gloves, in late March! Geez, this is the South! After lunch, we tried some other colors, and pink produced as well as chartreuse. Go figure! All told, each of us caught 15-20 Hickory Shad. These are strong, acrobatic fish that will bend your rod. 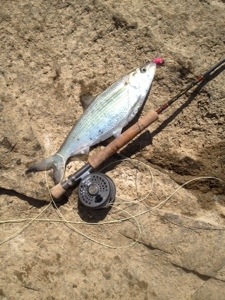 It was a good day. It’s great to catch up with Sam, and we each caught enough fish to be content. I’ve had days when I’ve caught more, but also days when I got skunked. Fishing, catching and fellowship. I need to do more of this…