My last visit to see Jason, Jenny and Sierra was more expensive than usual. We came back and bought a yogurt maker and an Echo Dot after seeing both in service there. Well, they are both pretty cool and cheap, really 😉
I want to talk about the Echo Dot here; we’ll do a review of the Dash yogurt maker later, after we eat the first batch of yogurt. We’ve had the Dot for about 36 hours, so we’ve not done extensive integration yet, and I don’t have a lot of smart devices to control. However, I can say that I’m pretty impressed with the Alexa service and the Dot hardware. 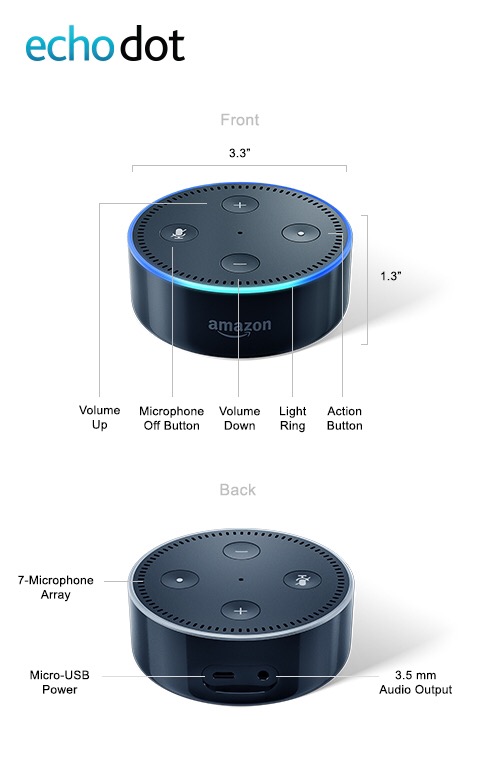 The Echo Dot is a tiny device with few external controls. Setup was very easy through the iOS app. Just, plug it in, connect to the Dot’s ad hoc network, set up the Wifi credentials, log in to Amazon, and that’s pretty much it. Alexa recognized both my voice commands and Jan’s out of the box, with no training. Hooked up Pandora, connected to a Bluetooth speaker, tried TuneIn Radio, weather reports (had to set zip code as by IP address it thinks we are in Winston-Salem), sports, alarm, kitchen timer, etc. The Echo Dot works well from across the room when addressed in a natural voice. Kitchen commands will be very handy when you need some information and your hands are greasy.

Alexa doesn’t have the sense of humor that Siri has, tho!

Tonight I set up the “Todoist” app, which manages todo’s, shopping lists, etc. I think this will be very useful. Todoist syncs very quickly, with a shopping list item or a todo appearing on the app on my iPhone or Jan’s iPhone within seconds of the voice command to Alexa. I have enabled a purchase PIN so we don’t accidentally buy anything from Amazon 😉

We’ll take it to the beach next weekend and try integration with the Nest thermostats there.

1 thought on “First reflections on the Echo Dot”