Here in the Triangle area of the NC piedmont, we have two main runs of white bass from our local reservoirs, Jordan Lake and Falls Lake. One goes up the Haw River from Jordan Lake, and the other up the Eno River from Falls Lake. I’ve historically fished the Haw River run, but I’d not done so in several years. The Haw is a bit closer from my house, about 18 miles as opposed to the 27 miles to the Penny’s Bend area of the Eno. The weather was looking great this week, with temps in the 70’s and blue skies, with redbuds and dogwoods blooming…but the problem was that Monday of this week gave us heavy rain and flooding, with both rivers rising several feet. I decided to go to the Eno, as the Haw is a much bigger river win a bigger drainage and I figured that the Eno would be much more fishable on Thursday.

I wasn’t sure if I’d want my canoe, but I figured it could ride on my truck if I decided not to use it. So, canoe on top and with a load of flyrods in the cab, I took off for Penny’s Bend. When I got there about 11:30 (a dog walk, a workout, breakfast and 3 lattes can slow you down in the morning), I was not encouraged. The water was very stained from the week’s rain. There were a fair number of fishermen on the banks, sitting on 5-gallon buckets they hoped to fill with bass, but the rods were still. I grabbed my favorite 5-wt, as well as my backup ultralight spinning rod, as I was not sure if I could find a spot for a back cast. The banks were muddy and slick from the several feet of chocolate-colored water that had been coursing thru 3 days earlier. At the Old Oxford Road bridge, the Eno is about a short double-haul cast wide. I watched from the edge of the bridge a while, and decided the water was shallow enough to wade to a little island next to the main current just at the top of the main pool…if I could get down the muddy bank with inserting a flyrod up my…well, you get the idea 🙂 . Whew! Made it, and then into the cool, fast water. It was probably about 60F, but I didn’t take the temperature. I was wading wet, and the water, calf deep, felt good.

What fly to use? I decided to follow the old adage of a black fly in stained water. Tied on a black sparkle bugger, made a cast and wham! a small white bass on the first cast, aimed at the seam between the fast riffle and the eddy in the big, deep pool. 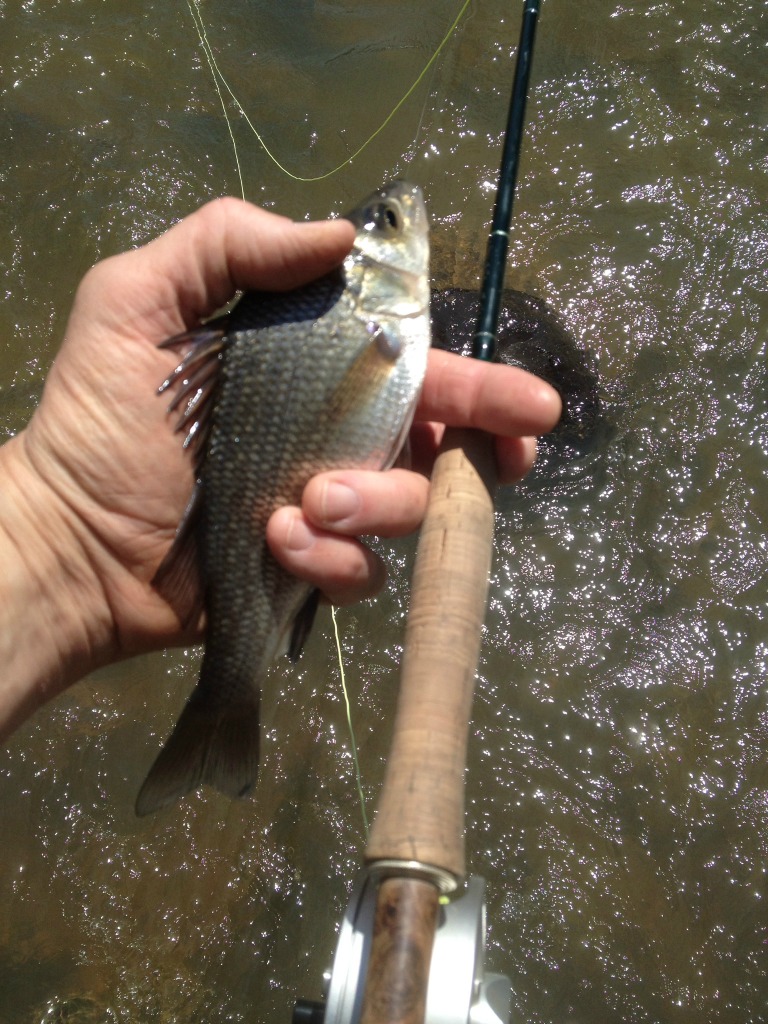 The next three casts brought 3 more fish! My streak broke on the fifth cast, however, as my bugger snagged a stick floating in the current. For the next hour or so, I was almost continually hooking and landing white bass. Almost all took my fly in a circle at the edge of the current no more than 20 feet across; with these bass, it’s all about finding a seam where the schools are traveling. These were not big fish by and large, but lots of fun to catch. So many, in fact, that they finally chewed up the bugger and I had to put on another one. A happy thing! By 1pm, the bite was slowing – I was still catching one every 5 minutes or so, but they were a bit bigger. My best fish of the day took the fly in the fast water, and stayed in the current, putting quite a bend in the 5-wt. 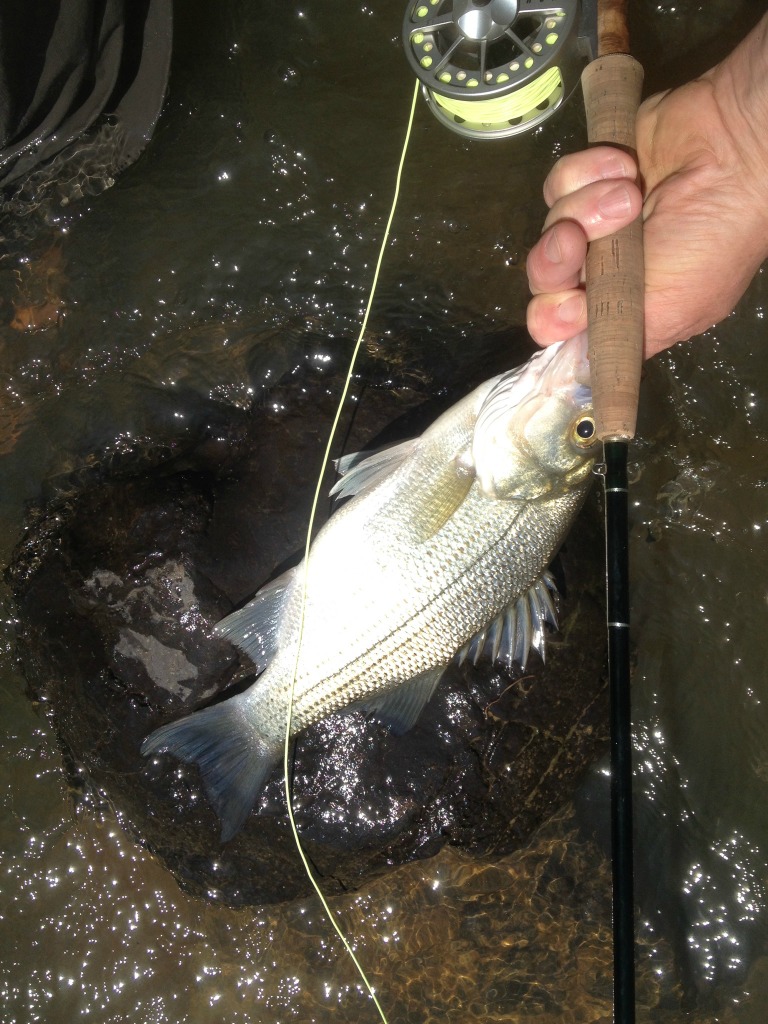 Another flyfisher arrived and took up a position on the other side of the riffle. He immediately caught one, but then no more. I was ready to go by then, as I’d really had my ticket punched. He slid into my spot as I climbed the bank (I found a better way up than down), and I wished him well and headed home for a cold beer!

A heckuva a nice spring day!