Today was my second day this season to fish the lake at Camp Clearwater, a YMCA camp near Chapel Hill. It’s just 8 miles from my house, and the local TU chapter supports a winter trout fishery there. It has been winter for sure, even here in the south, and the north bank of the lake was still covered in snow and ice, though the temperature was in the upper 40’s under sunny blue sky. Naturally sustaining trout populations are usually at least a two hour drive for me, so this is a luxury. While these are annually stocked fish, the lake is several acres in size and the fish are often quite challenging to catch. In December, I fished hard all day and caught just a couple. However, today was different. Unusually, I outfished my buddy Sam, though I need to give him an “assist” as in basketball, since he tied the flies I used for about half the 15-20 fish I caught, including this very nice one: 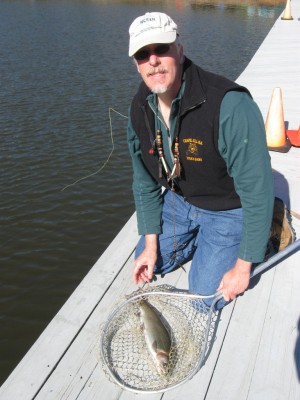 Most of the fish I caught today were smaller like this one. However, they were often spunky and acrobatic, with many jumps: 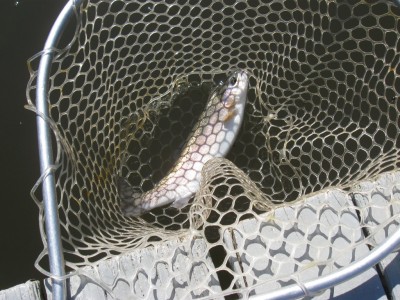 I caught about half of the fish on a Chili Pepper streamer that Sam tied (including the big one), and most of the others on an olive fly with an orange front highlight that another fellow angler shared (he called it a “Diawa” but I can’t find a pattern; will have to reverse engineer!). Orange seemed to be the ticket today. Lest you think I’m a complete fly mooch, I did catch one on flashback pheasant tail I tied 😉 . When I wasn’t fishing the streamer, I had a dropper rig under a strike indicator with the flashback pheasant tail as the upper and the “Diawa” as the bottom.

It was a great day, with great fellowship. I’ll be sure to sign up for Clearwater days again next year.