I’ve badly neglected this blog, with no posts since spring 2019. But heck, let’s put up a fishing post!

I met Sam at Clearwater Lake near Chapel Hill on Sunday December 5th for one of our 2 annual Clearwater fishing days. It’s a winter fishery only, as central NC is too warm to keep trout all year. The TU chapter stocks it a couple of times, starting in November. You reserve a slot ($45 per day) and there are 8 or 9 fishermen. Sam and I like to fish the dock so we can talk and catch up with each other while we fish.

The fishing is always good but the catching can be tough sometimes. This is not always easy fishing. But we’d had a few days of warm weather and the fish were on their feed. Each of us caught 15-20 nice rainbows, strong and feisty. Caught many on Sam’s well tied wooly buggers, then switched to Chunky Chernobyls with Sweet Things as a dropper. 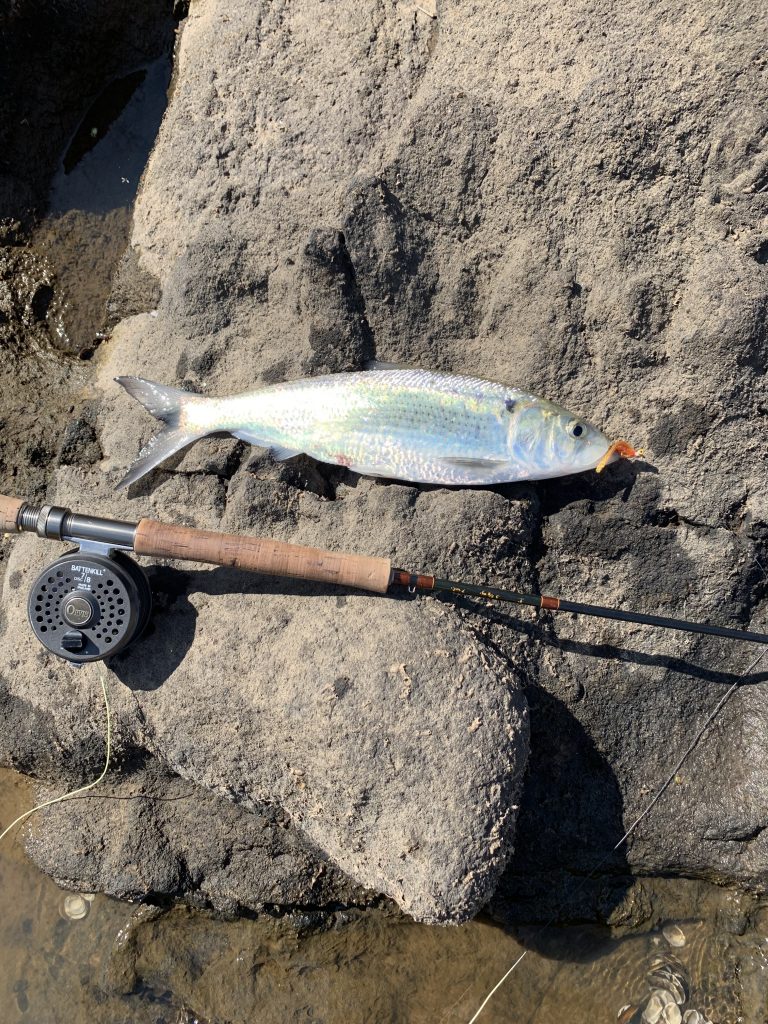 The last couple of years weren’t good for making the trip to Weldon to catch shad on the Roanoke River. Either the water was too high, or too cold, or the few good days didn’t mesh with my schedule, or Sam’s. However, we finally got a beautiful spring day when we could both make it, and the fish were there.

I drove from Emerald Isle and met Sam in Weldon. It’s about a 2 hour 45 minute drive for me, and about 2 hours for Sam coming from Durham. We met at 10am. I brought the Mad River canoe with me, as our plans were to fish from the rocks, and we wanted to get to the far side from the boat ramp. We got in position by 11, and fished until just after 3. The action was steady. We’ve caught more fish some years, but rarely so many big strong ones. We caught fish on orange flies, pink flies, green flies, and even some on shad darts on the spinning rods, too. 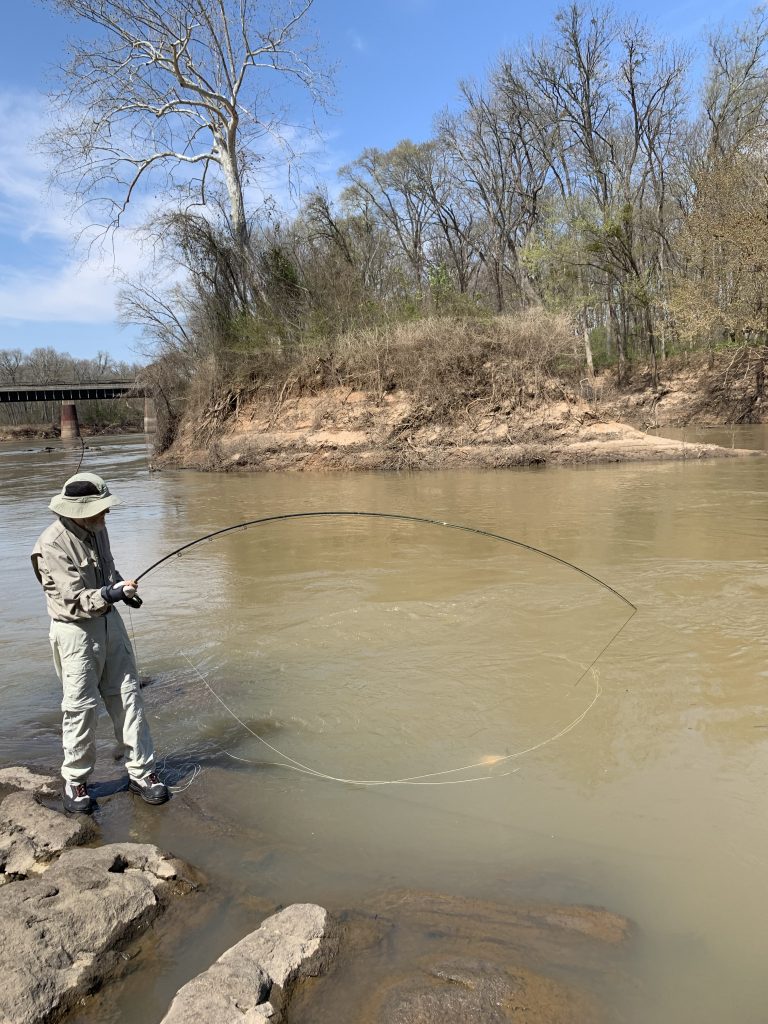 Sam with a shad on the line!

Each of us landed 20+ fish, though unusually I caught a few more than Sam 😎 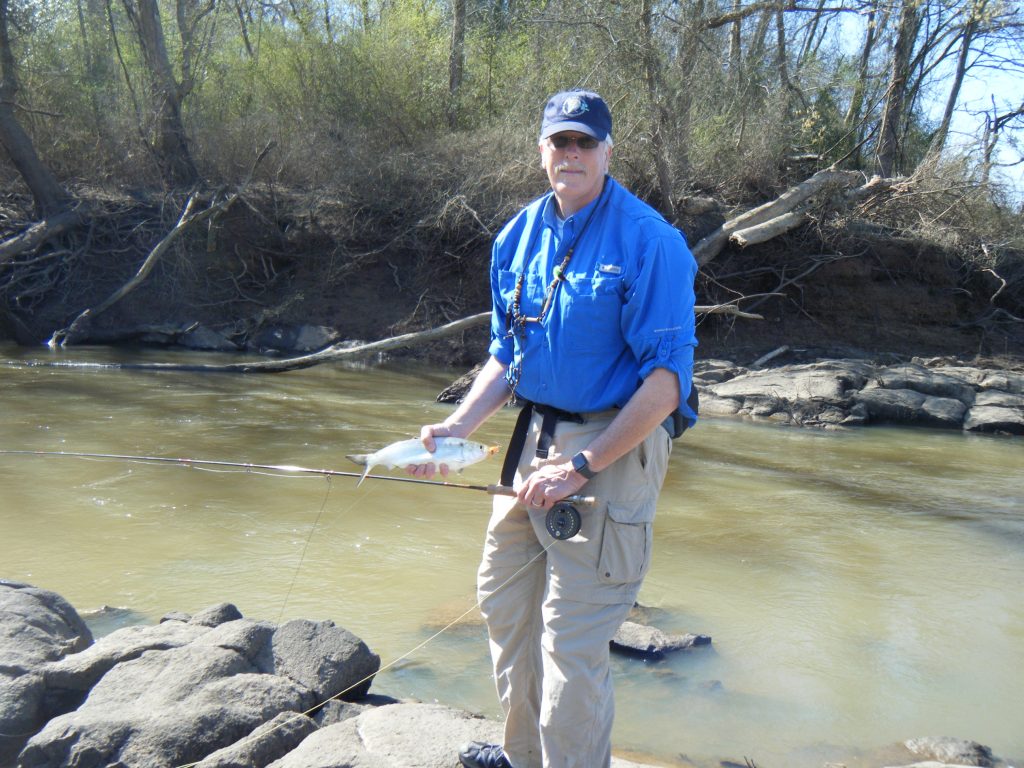 Joel with a nice one!

The beers were cold, the day warm, the fishing good, and we enjoyed watching the ospreys plucking shad out of the river.

After our arms were tired from catching fish, we loaded up the canoe, ran the rapids, and head back home. A great day… 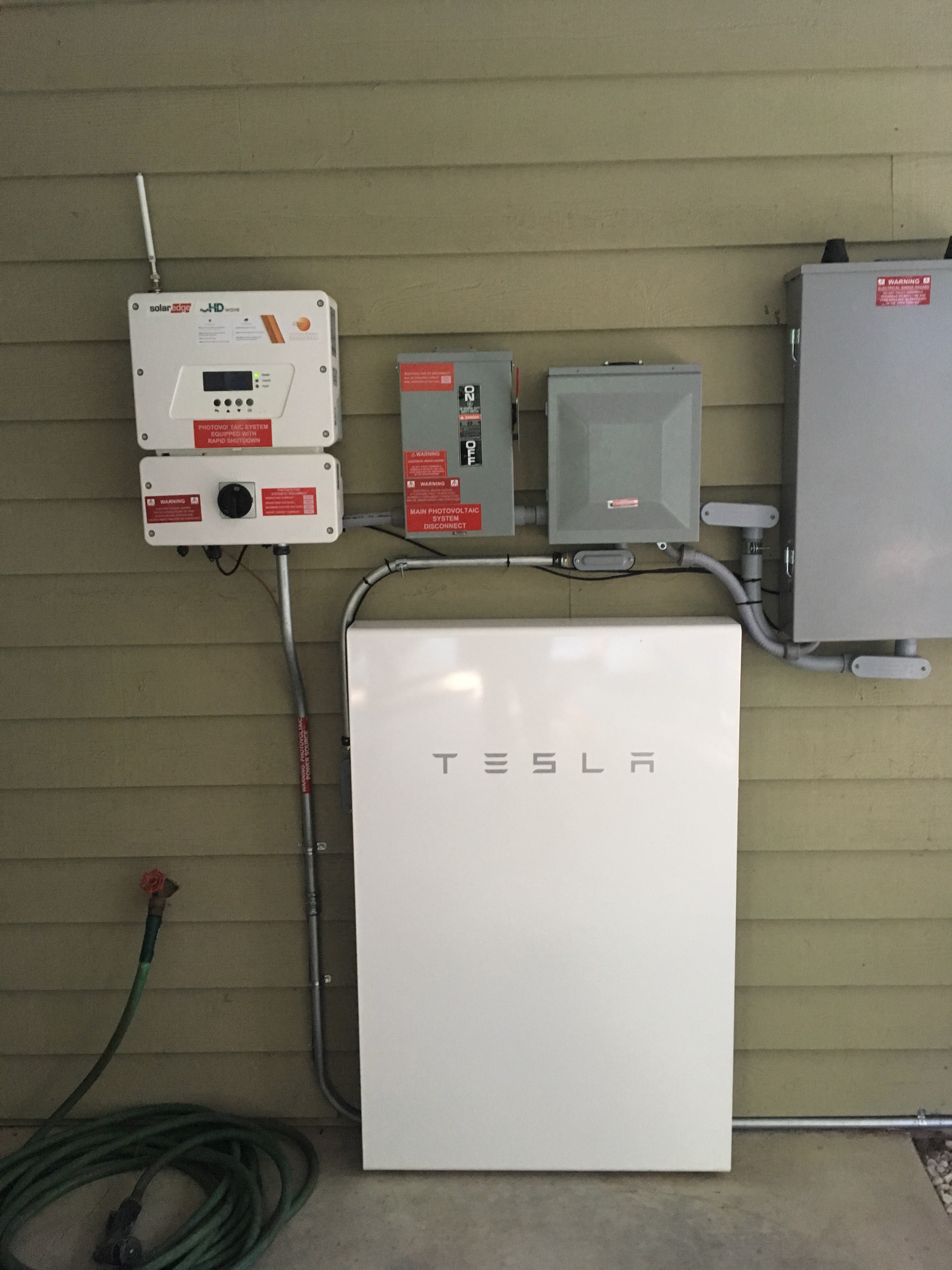 The EV is probably still not an “only car” for most folks, but as a second car, it will fill a lot of niches with current and emerging products.

I’ve written here several times about trout fishing at Clearwater Lake, and today was the second trip this season for Sam and I to head out. It’s always great fun and camaraderie, even when the fish don’t cooperate. We each landed a few, missed a few more, and dodged our own flys on the back cast as the wind was howling most of the day. It was warm, tho, actually unseasonably hot, near 80F. I started casting a Chili Pepper, finally found a willing trout. Though these are all annually stocked trout, it’s anything but “shooting fish in a barrel” as these guys can be hard to hook…

Joel’s first fish of the day

I tried for the “Clearwater trifecta” of a trout, largemouth bass, and a bream. I caught the largemouth but never landed the bream. Sam worked hard and finally connected using size 20 midges under a a CDC. 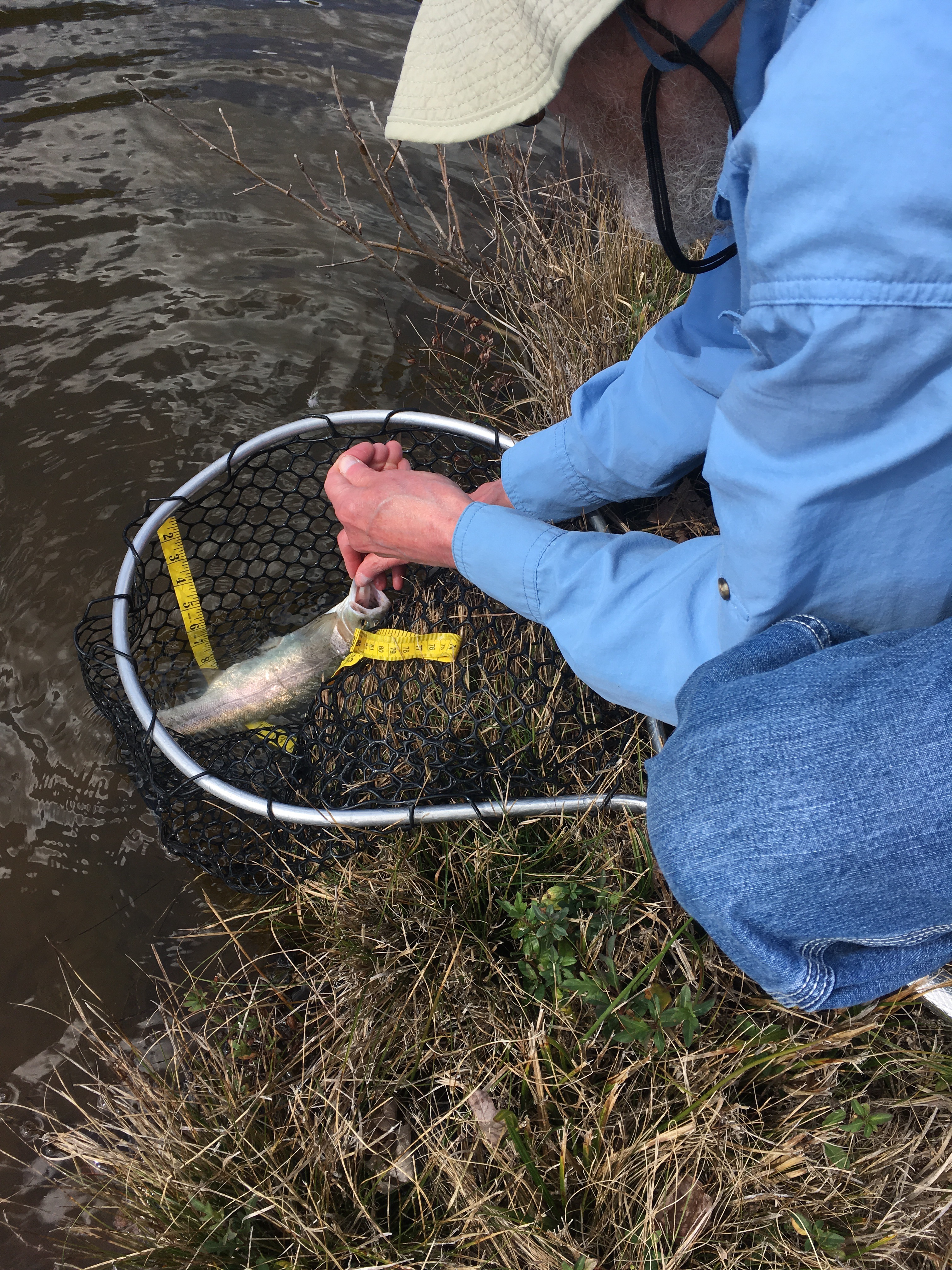 Thanks to TU and the YMCA for making it possible for me to catch trout 15 minutes from my driveway.

Its been a week since I put up a TV antennae at the beach house and dropped the Time Warner Cable subscription back to Internet only. Faithful readers of this blog know that it’s now been 4 years (July 2011) since I put up an antennae on the Chapel Hill house and dropped Uverse. I used the same configuration at Emerald Isle as in Chapel Hill – a ChannelMaster 4228HD antennae and a ChannelMaster 7777 preamp. This has been a while in coming, but with TWC raising rates once again, it was time to jump. We’d been paying $105 for non-digital cable and standard 15×1 Internet. TWC said the new rate would be $130, and would require a digital converter on each set. Enough! Internet only is $45 plus tax, so say $50. That’s $80/mo, or nearly $1000/yr for basic cable. Do we watch that much? Nope.

In fairness, we do pay for multiple streaming services, but we can use those in Chapel Hill or EI. Since we were already paying for these, it’s moot. We subscribe to Netflix, HBO NOW (for Game of Thrones), SlingTV (for ESPN). These are about $45/mo. We have a TiVo in Chapel Hill for $15/mo, so that’s $60 total, but it’s flexible and portable.

Technically it’s easy, and you can feed all the TVs in your house using the old splitter in the TWC box on your house. If you have only one TV, an internal antennae for $50 can work, but for several sets, you need to feed the distribution system.

For reception, at EI, I’m picking up stations 50-70 miles away with clarity. WITN, WNCT, WCTI, WUNK and others.

So, if cable is getting you down, there’s an alternative!

I’m playing with Feedly as a replacement for Google Reader. My first reaction was “o my gosh, this is such a busy interface” but I was able to quickly figure out how to set the feeds to display in compressed mode, which is much easier to scan without distraction (IMHO). The great thing was the ease of entry. Simple login with Oauth with my Google credentials and automagically picking up my Google Reader feed configuration without even having to set up an account @ Feedly! I figured out that bookmarking a post equaled “starring” a post in Reader. I’ve attached Twitter and Facebook, tho I’ve not tried sending anything thru those interfaces. I’m using it with Chrome and iOS right now, but overall, this looks like a quite viable alternative. There are some things I see already that I like better than Reader, such as the breakdown of historical posts by day. So, I give this a cautious thumbs up…