Much ink (metaphorical and physical) has been spilled with regards to Apple’s first wearable device. I won’t attempt to write a comprehensive article, as those are best found in the various trade journals where folks are focused on such endeavors. My contribution here is just my “n=1” sample of myself.

I ordered my Watch (the 42mm Sport model with a black band) on April 10th, so where around mid-morning. Since orders went live at 3am EDT, I knew I’d be well back in the queue, and sure enough, my ship date said “June.” That was OK, though, as I was inspecting my eyelids at 3am and didn’t want to try to get in the first tranche of shipments. I was thrilled, then, to get the notice on May 29th that my Watch was on the move! I got one of the most interesting UPS tracking displays I’d ever seen, as I watched it move from China to the US on its way to Chapel Hill. 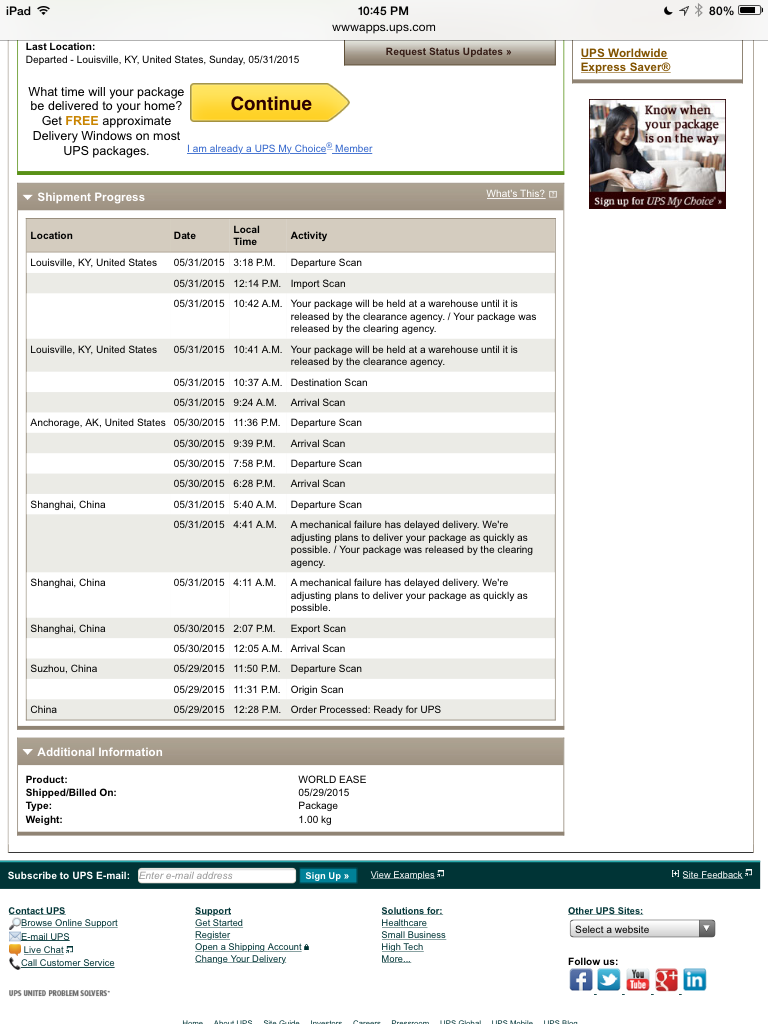 It arrived around mid-day on Monday June 1st, and I was eager to give it a try. Alas I had meetings for most of the afternoon. I did carve out a few minutes to unbox the Watch and begin the setup process, so I could play when I got off my WebEx’s. The box was heavy and odd-shaped for a watch (long) but I remembered reading about this and the way they came with the band flat. I pulled out, skipped the setup documentation, and fumbled for the power button. As there are only two choices, it was a short search. Voila! An Apple, the symbol of a booting iDevice! I went thru the setup screens, told it to load all the apps matching those that I had on my iPhone, and it worked for a while while I did the same. It occurred to me that the battery charge might be low, but it wasn’t complaining and I didn’t see at first how to find the charge level.

When my calls were done, it was playtime! So I started pushing, twisting and poking. I’d read that the interface was not intuitive but it seemed logical to me. I tried apps, set watch faces, and started to make it mine. Ok, I did cheat. I couldn’t figure out how to find the battery charge. Google. Oh, doh! Glances, and a swipe thru the options. Ok, I couldn’t figure out how to change the world clock time on a clock face. Google. Oh, doh! Just select the widget and then spin the crown wheel to select. Overall, things really did work the way I expected.

It’s now been about 30 hours since I got the Watch. What do I think? Very cool. Feels good on my arm. I’ve not worn a watch in years, but it’s light and unobtrusive. Battery life? I’ve been playing with it a lot today, and it’s been over 14 hours since I took it off the charger. Battery indicator says 52%, so that’s not an issue. What can you do with it? It does tell time very effectively! It lights up the face when you raise your arm to look. It alerts for text messages, and the voice recognition for reply is better than expected. I’ve made a phone call, ignored a call, and sent several texts. I’ve read a lot of email previews. The Gmail app works nicely with the alerts and has a lot of flexibility , and you can archive messages and remove them from your inbox. Apple’s mail app works well, too, but the way Gmail segments your mailbox lets me control which messages appear on the Watch better. The biggest shortcoming I’ve seen so far is the inability to respond to email, even with a canned phrase. I understand the design decision but I hope this gets updated to add reply functionality. I’ve not tried the exercise app yet, but will do so. MotionX GPS has a nice app that I know I’ll use. I like the timers and stopwatches. The activity monitor will encourage movement and fitness. The weather apps are handy. I’ve added my credit cards for Apple Pay but have not had a chance to use it yet. My phone is a 5S so I’d not been able to participate in Apple Pay and I’m looking forward to it. I like the news alerts from the NYTimes and others. The presentation remote control apps for Keynote and PowerPoint will be useful; I have a projector dongle for my phone, and it’s handy to have a remote to drive the presentation from the phone.

The bottom line there is a lot you can do with the Watch. I’m eagerly looking forward to new apps and software updates as the ecosystem matures.

3 thoughts on “Reflections on the Apple Watch”