Headed to Weldon, NC, to fish the shad run on the Roanoke River today. It’s been a cool spring, and I had wondered if it was too early. Preliminary reports were that some shad had been caught last weekend, so I loaded up the pontoon boat and headed to Durham to pick up my regular fishing buddy Sam and his son Bryan. It was a cold morning with lows below freezing, so we weren’t in a big rush to get there. Arrived about 10:15, and started to fit out the boats. The river was running about 4,100 cfs, which though low by historical standards is a nice level to fish. The river at Weldon is dam controlled, with a series of three large reservoirs just a few miles upstream. I took the water temperature, and it was ~50F, which is a bit cool. The air temperature was headed for 60F under sunny skies. We crossed the river and beached the boats on the big island across from the launch, and headed for a rock island in the “Little River” (where the river splits with about 90% of the water going down the main branch and the rest down the Little River). We’ve done well on this rock in years before, and today was no exception. Just after I waded over, I caught this nice shad. 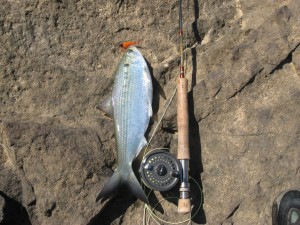 While I caught this one on an orange fly, pink proved to be the color of the day. We caught fish at a modest pace, but steadily, with each of us catching 12-15 fish. They really aren’t at Weldon in huge numbers yet. I’m heading back in a week and I’m hoping for a really good day. However, we certainly caught enough to have a nice day. One highlight was seeing an osprey fly right past us with a freshly caught shad in its talons: 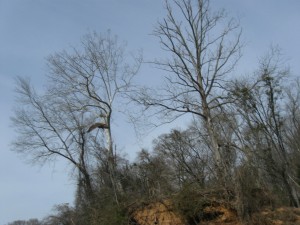 We saw an otter swimming in the river as well, but he always dove below the surface before I could get the camera out. The shad we caught were of good size; I caught this one, the largest any of us landed (not the best picture as the fish rolled in the sand as I was unhooking it): 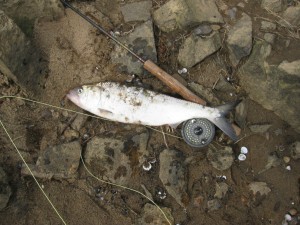 A great day of fishing, catching and fellowship…