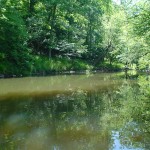 I spent a couple of hours this morning at “Terry’s Pool” on the Eno River. I’d gone with Terry Hackett a couple weeks ago, but I’d not connected with any Roanoke Bass on that trip. I had a bit of time today and drove the 15 miles from my house to the State Park.

The 13-year cicadas were droning loudly as I walked through the woods to the river. I was wondering if there was already someone else there, since there was a truck parked at the trailhead. My luck was good, as there was no one in sight when I river. I tied on the same fly I used last trip (literally, the same one 😉 ) and stepped into the water. This week it was running clear, with the bottom visible in 3 to 4 feet of water. I tried to wade gingerly to not throw up a cloud of mud. I had some strikes, and caught a couple sunfish. I decided to concentrate on Roanoke Bass this time, and worked the fly slow and deep among the rocks in the center of the pool and the flow. A strike, and this bass came to hand: 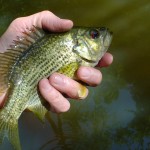 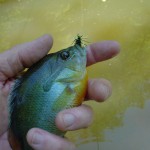 A decent fish scooped a cicada off the water less than 5 feet from me. I looked for a popper that matched the color, tried a couple, but only had strikes from small sunnies.

I then put on a crayfish pattern, weighted with a heavy brass cone head. I snagged the first 2 or 3 times I threw it, catching up in the rocks. However, that’s where you want to be since that’s where the Roanoke Bass are lurking. I had a strong strike, and brought this nice one in: 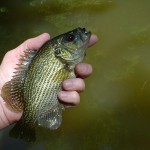 Caught another smaller bass, and a few more sunfish. A great morning, and I hiked back to the truck, quite satisfied with the start to the day.