The state of broadband connectivity is the US is pretty weak. When I look at the bandwidth available to folks in Europe and Asia, I wonder about the policy decisions that have gotten us in the non-competitive mess we have. I’m fortunate to have two providers available, Time Warner Roadrunner and AT&T U-Verse. U-Verse has just instituted a 250GB/mo. cap on bandwidth, and while I’m not coming close to that, it’s pretty aggravating to have that in place. I’ve generally been pleased with U-Verse, as the performance is significantly better than what I had with TWC, especially on the upstream bandwidth, and reliability has been good. I’d still like to have what a friend in Jamestown, NC; a DSL connection with 30Mb up and 30Mb down for $70/mo. I have to be satisfied with my 1.5Mb up and 18Mb down…it’s progress, but now what I’d like to see. Upstream bandwidth is critical for things like videoconferencing.

Since the beginning of the year (mid-January) I’ve had a probe from SamKnows measuring my bandwidth. It’s a part of a project with the FCC to help determine if we are getting the bandwidth we’re paying for. I’m pleased to report that it seems that I generally do get good throughput of approximately the metered rate. Here’s my graph for the last week: 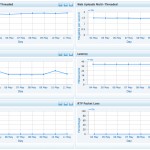 Here’s hoping that we all have more competition in the broadband marketplace, and that we can all see our available speeds increase.

Save the Internet! Support Network Neutrality!