When I did a Facebook post on this topic a couple days ago, I promised to write it up a bit more thoroughly. So, if you read the FB post, you can skip this, or not. 😉

The entertainment systems I’ve cobbled together over time have worked, but only with directions written and taped to the bottom of of the 4 remotes on the end table. Needless to say, it’s not been a recipe for marital harmony. Let’s just say that I have a higher tolerance for a multi-remote control system than my dear wife!

This year in early March, one of my sons (who is more of a geek than me) suggested after a visit that it was too complicated and he agreed with his mother. He showed me a high end version of a Logitech remote, but I just couldn’t hang with the $250 price for something I was sure would not work. Not much happened until I was headed to a conference for a few days…and it was made clear to me that something needed to be simplified!

So, when I returned I looked again at the Logitech remotes and saw that there was a simpler version without a touchscreen remote. I ordered the Harmony Companion, and it brought harmony to the house! 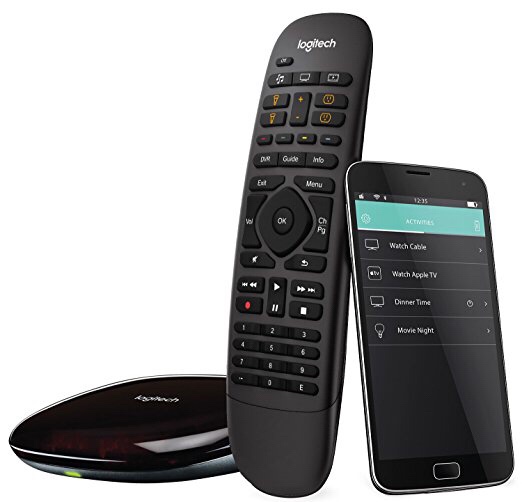 It truly works! I set up 5 different programs – one to set up for music streaming from Alexa, one for the TV (we use an LG TV, OTA programming, and a TiVo), one for AppleTV, and two for Roku, one to launch HBO Now, and one to launch Amazon Prime. I have a Chromecast also in the Denon receiver (actually, I have three of them all in different TVs), but never use it so no program yet for that.

Programming the remote involves a set of “activities,” which are multidevice sequences of actions to set the stage for the activity. You can control lights, etc as a part of an activity if you have compatible tech, but my Smartlife WiFi outlet sockets don’t work with it. It does apparently support and understand remote commands for just about any device with a remote control.

I did my setup on my iPad, and apparently that’s easier than the computer-based setup per the reviews. The UI allows you to select devices and actions as a part of the activity. The problem is that it doesn’t allow you to delete or move a step, though can add or modify a step. My TV sequence involved a bit of tweaking as when you turn on the TiVo and TV, the TV doesn’t sync to the HDMI input unless you do another source switch a few seconds later. So I had to turn on the TV, the receiver, the TiVo (with a different source), the delay several seconds (there is a delay command for just this type of situation), and then switch to the TiVo input. The iPad app crashed several times while I was doing the activity setup; it’s the weakest part of the system.

I also set up the Alexa skill and sync’d the accounts. This is another area that doesn’t provide as much control as I’d like. When you set it up, you get to choose keywords used in the invocation, but there’s no way to edit this after setup, at least that I’ve found. It also takes a few minutes for the accounts to sync. But it works! “Alexa, turn on the TV” does so, and “Alexa, turn on Tunes” sets up things for Alexa to use the receiver. With the TV and other such activities, you can also tell Alexa to “turn up the volume on the TV” and it will adjust the receiver volume setting.

The Companion remote has three activity buttons, shown as “music,” “TV,” and “movies” but using icons. You can short press or long press the button and that will give six activity invocations.

The remote talks to the base with Bluetooth, and the base emits IR/RF/Bluetooth to control devices. Per the directions, you can place the base with other components , and the IR reflects off the room and does not have to point to the targets.

So, this really does work. This particular version controls up to 8 devices. It sells for $100-$130 and has brought “harmony” to my house!