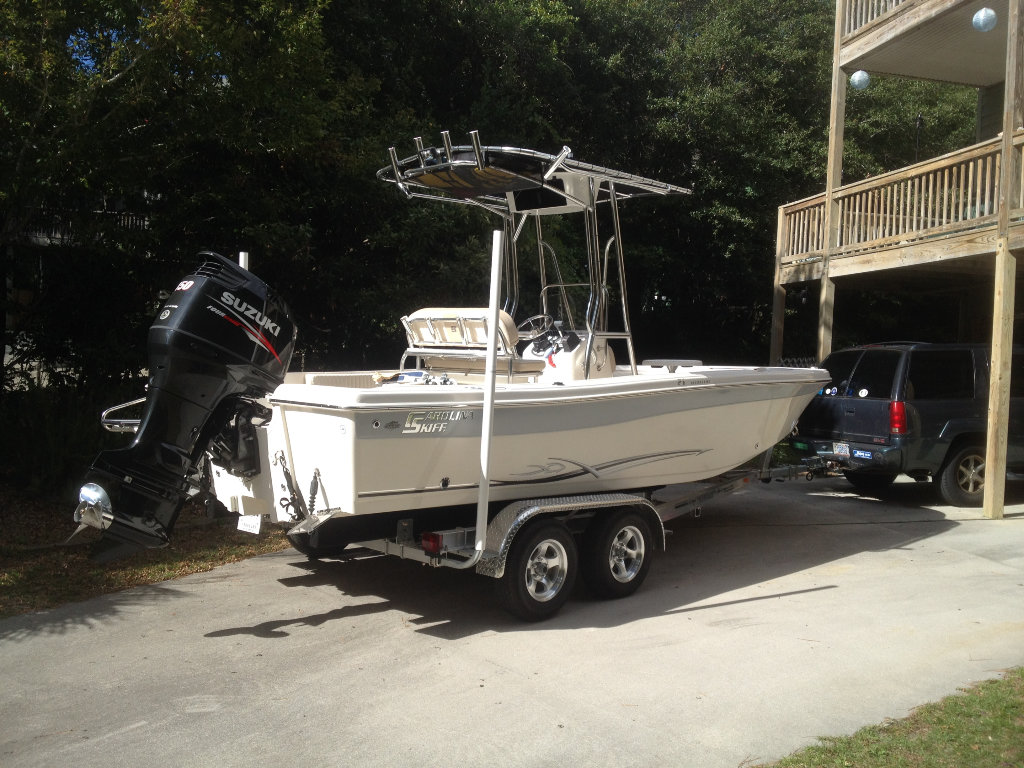 I decided to take the plunge and upgrade the memory on my Acer Chromebook. Ostensibly it’s up-gradable per the Acer website, tho each system ships with a “you void the warranty if you remove this” sticker over the single screw that closes the case on the Acer. The system has two SODIMM slots but only one is populated. I’ve been quite happy with the 2GB C710-2833 with vRAM configured, but it did suffer from lags repainting the screen when switching from tab to tab. On compatibility recommendation from Chromebook Central, I bought a “Kingston Value RAM 4GB 1600MHz PC3-12800 DDR3 Non-ECC CL11 SODIMM SR x8 Notebook Memory (KVR16S11S8/4)” from Amazon for $38.99. I put it in the open slot and Chrome OS was quite happy with 6GB total (the new 4GB stick plus the OEM 2GB stick). I did turn on vRAM at 3GB, but it’s not been used so far. I’m showing 2.5GB free, with 15 tabs open (plus the Weatherbug, Google Keep and Files apps), with the system up for over a day (per “top”). A very good upgrade! With the original $187 cost of the C710-2833, this takes it to $226 for the system as it’s configured today…not bad for what it does for me!

Perusing the tech news this morning, I came upon a very cogent article from Wired on the current state of the smartphone technology space and marketplace. I think this crystalizes a number of things that I’ve been observing and thinking. I’ve still got my 2010 original iPad. It is beginning to have a harder time running today’s software, but getting a new one is simply having a better tool that works in the same way. I can still do a lot of productive things with my iPad that I could not do before, such as as grading papers for my class using PDF markup, which is a great use case for a tablet. I’ll eventually get a new one, but not yet. My iPhone 4S is not the sleekest or fanciest phone around, but it does run the new iOS 7, giving it new life. There’s nothing radical in iOS 7, but it continues to make the iPhone experience very satisfying. I’d like a new phone, but I think I can stretch it for another year, plus I just got a nice, new waterproof case that won’t work with the new form device form factor. There are nice Android-based tablets and phones out there, but what’s the difference, other than slightly different ways of doing the same things, plus variations in screen sizes and a few interfaces?

That’s where we are now, incremental evolution, and “me too.” I think that this is the reason for the buildup and subsequent denouement when Apple didn’t introduce “one more thing” that was truly revolutionary. Folks want to think that there is some new paradigm waiting to be exposed, when in many respects, I think that the next paradigm changes will be in business models, particular in entertainment content, as we leverage our existing tools (or incremental innovations in those tools). We’ve reached a plateau in mobile that reminds me of the PC marketplace once the basic design, form factor and software stack had been determined in the early 1990’s (Windows 3.1 and Windows 95, with the subsequent wave of application software innovation that built upon that foundation).

I think that is one reason that I’m excited about Chrome OS. It’s not that it’s new amazing hardware, it’s that Chrome OS is a new (old, back to terminals 😉 ?) way of looking at things. It challenges business models, but it’s not about hardware innovation. It may be another 10 years (or more) before we see another industry-shaping, game changing product like the iPod or iPhone. Or, it may be happening now with 3D printing and we just don’t quite know it, and 3D printing hasn’t yet had its “iPhone moment.”

Avast, well I’ll be a bilge rat, it’s September 19th, and I’ve almost missed Talk Like a Pirate Day. I even had it on me calendar! Better get to working on it smartly, or folks will think I’m a lubber!

The Acer C7 Chromebook is a really nice, simple computing device and I’m enjoying it quite a bit. One thing that was a bit aggravating was that it didn’t support Bluetooth, whereas other Chromebooks like the Samsung ARM did support it. It was rumored to be a software issue, and sure enough, with the latest beta (30.0.1599.30) Bluetooth is enabled! I’ve successfully paired it with a mouse and a speaker and it works quite well. However, this update seems to have broken the Citrix Receiver app. Oh well, easy come, easy go 😉

Now looking forward to the next update and a fix for the Citrix Receiver!

I finally got a chance to try out my Creek Company U-Boat 2000 float tube today. I bought it for my birthday at the end of June but just hadn’t gotten an opportunity to get it wet yet. It’s a basic tube, but has all the features I’ll need, I think. My “use case” for this is floating in the small warmwater streams in central NC. I’ll use my ODC816 pontoon, which I’ve had for years, for long floats with white water such as the James & Maury rivers in Virginia. I went to the Eno River today, starting in “Terry’s Pool” (which is almost too shallow) and then heading downstream.

I inflated the boat at the truck, slung it over my shoulder, and headed up and down the hill, about 1/4 mile to the stream. I put the fins on over my shoes, but quickly decided the stream was too narrow and shallow for effective use of fins, and just kicked along with my wading shoes. I decided to start with a crayfish pattern at the end of my 5-wt, hoping to snag a Roanoke Bass out of Terry’s Pool. I thought I had one, but it turned out to be a really nice chub. As I slipped into the deeper, slower water below Terry’s Pool, I started picking up sunnies like this one: 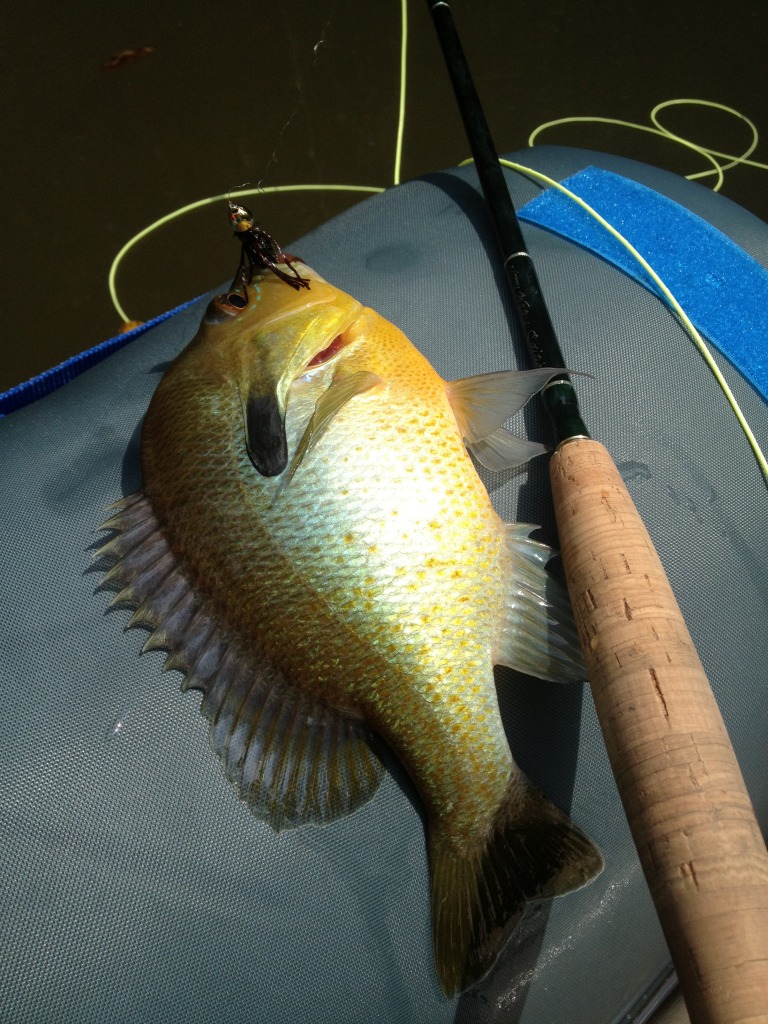 I tried a couple smaller streamers and picked up several smaller sunnies, but switched back to the larger crayfish to try to get larger sunnies or bass. I fished a brown crayfish for a while, until I lost it to a tree 😉 . I put on a green crayfish (same exact pattern, just a different color). The first cast with the green, I snagged this nice little largemouth:

He jumped out of the water several times before I brought him to hand. I caught several more nice sunnies on the green crayfish, but no more bass. Eventually I saw a nice break in the bank to make it easier to climb out, and decided to head back to the truck. I’d only been in the water about 2.5 hours, but I knew the hike back along the bank was thru a summer’s growth of brush. Sure enough, I had to crash thru head-high annual growth to get back to the trail. The only good things were that there were no briers, and no ticks, as they are much worse early in the year.

As I type this, we’re having thunderstorms and flash flood warnings, so I’m feeling vindicated about coming back a bit early! It was a great day, and an auspicious first outing for the U-Boat!