The weather this past weekend was not the best, but Sunday was nice enough to take the boat out for a few hours of fishing. I’d moved some fishing gear on board, putting on a couple of boat rods for trolling, as well as plugging rod, and a variety of casting and trolling lures. I’ve also put my 9wt flyrod on board as well for times when the fish are on the surface.

It was overcast and cool with a 10 to 15 mph north wind as Jan and I headed from the ramp, around Archers Point, under the bridge, and out of the sound thru Bogue Inlet. The beach here faces south, so the north wind flattens out the ocean like a lake for the first couple miles offshore. As we headed out the channel, I spotted a cluster of boats around the first sea buoy. Didn’t see any birds working or signs of obvious fish activity, but I dropped a couple of lines off the stern and headed generally east (parallel to Bogue Banks), about a mile offshore. After a while, I took off the Hopkins and gold spoon I’d been trolling and put on two Gotcha plugs. Then I looked and saw some birds working the water several hundred yards away and we turned and headed in that direction. I got out the plugging rod and moved to the bow while Jan had the helm. Soon, she said, “is this rod supposed to be bouncing like this?” I put down the plugging rod and went to the stern and pulled in a nice Spanish Mackerel. We trolled a bit more, and picked up some small bluefish. A couple times we had more than one on, and Jan had to bring one in. The blues were vigorously working the water all around and I caught several on the plugging rod. I thought about rigging up my flyrod but decided to leave it in the rack.

We moved around the area, which oddly only a few boats were on. There was some vigorous disturbance on the water and we moved closer. I’m not sure what was there, but they were big. Saw dorsal and tail fins that made me think it was a pod of sharks. Jan asked if we could put some distance between us and them 😉 . One of the boat rods dipped again, and it was another Spanish, bigger than the first. By now, the sun was out and it was warming up, contrary to the forecasts. We puttered around a bit more, plugging up some more blues, and then decided we’d had a great time and headed for port. A great day! I’ll be back this coming weekend, and hope to repeat! 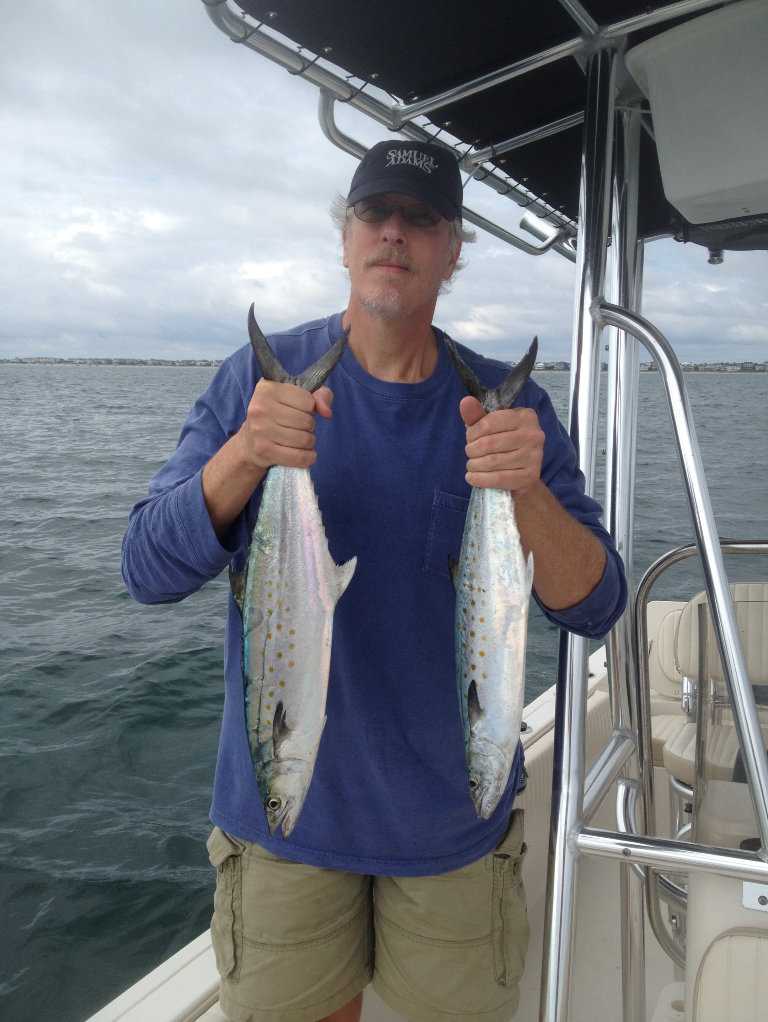