In late September, my wife Jan, my sister Susan and I spent a long weekend in the Palm Springs area (apologies to y’all who’ve already seen some of these pictures on Facebook). Ostensibly, the original reason for the trip was a visit to the Thornton Winery in Temecula, to catch the Dave Koz Summer Horns tour. We saw this show last year in High Point at the Coltrane festival, and it was great! We had some Wyndham points we needed to use, and found a nice place to stay in Indio, at the east end of the Coachella Valley, about 25 miles from Palm Springs proper. We flew out on Wednesday, and up until the concert Saturday night, our plans were pretty fluid. We knew we wanted to see Joshua Tree National Park and visit some of the Temecula wineries, but that was about it. Susan found out about the Palm Springs Tram to the San Jacinto state park, and we decided to try that. Honestly, this was the highlight of the trip for me! We found out that Palm Springs is way more than casinos, golf and tennis 🙂

The valley is at an altitude of less than 500 feet, and is hot, even in September. It was over 100 Wednesday afternoon when we drove in from LAX, but the palms were lush and there seemed to be no water shortage in this area. Thursday morning, we drove west from Indio to Palm Springs, went up the access road to the tram. It climbs to 2600′ in 2.5 miles. The Tram then goes up to 8500′ in about 10 minutes, taking you to the mountain forest from the desert, and dropping about 30 degrees F. We decided to head toward San Jacinto Peak, which is 5.5 miles (11 mile round trip) from the tram, and at an elevation of 10,834′. The trail goes through a beautiful forest, on the way to the peak. 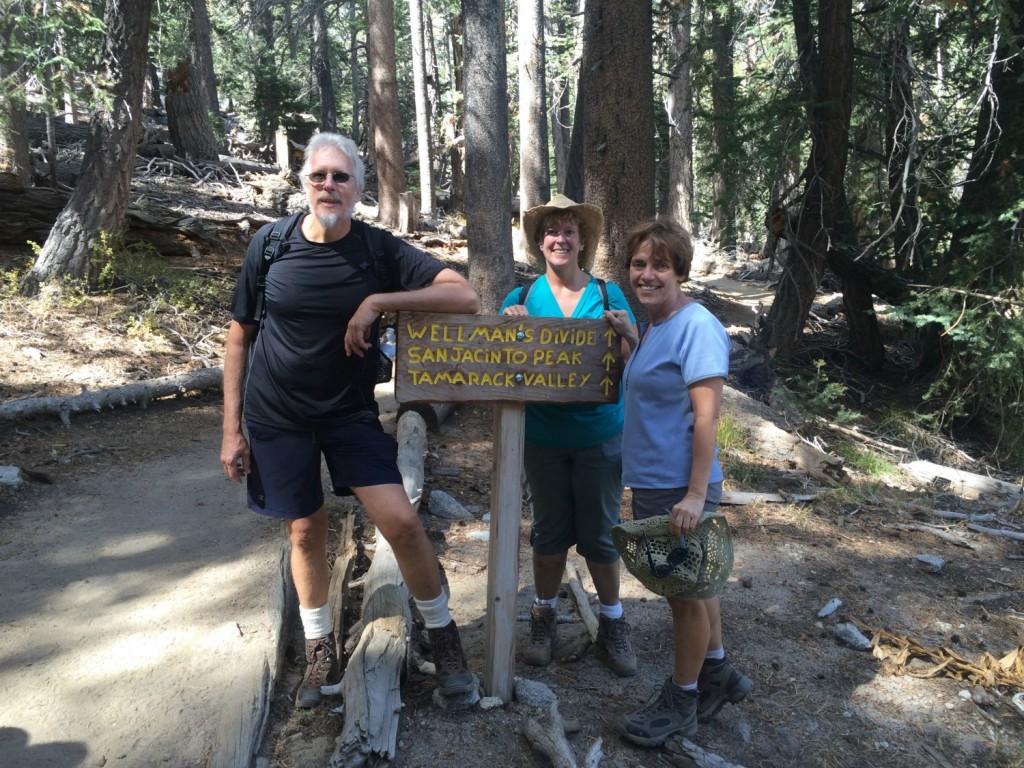 The summit is a rocky boulder pile, but it did have a picture-worthy sign. 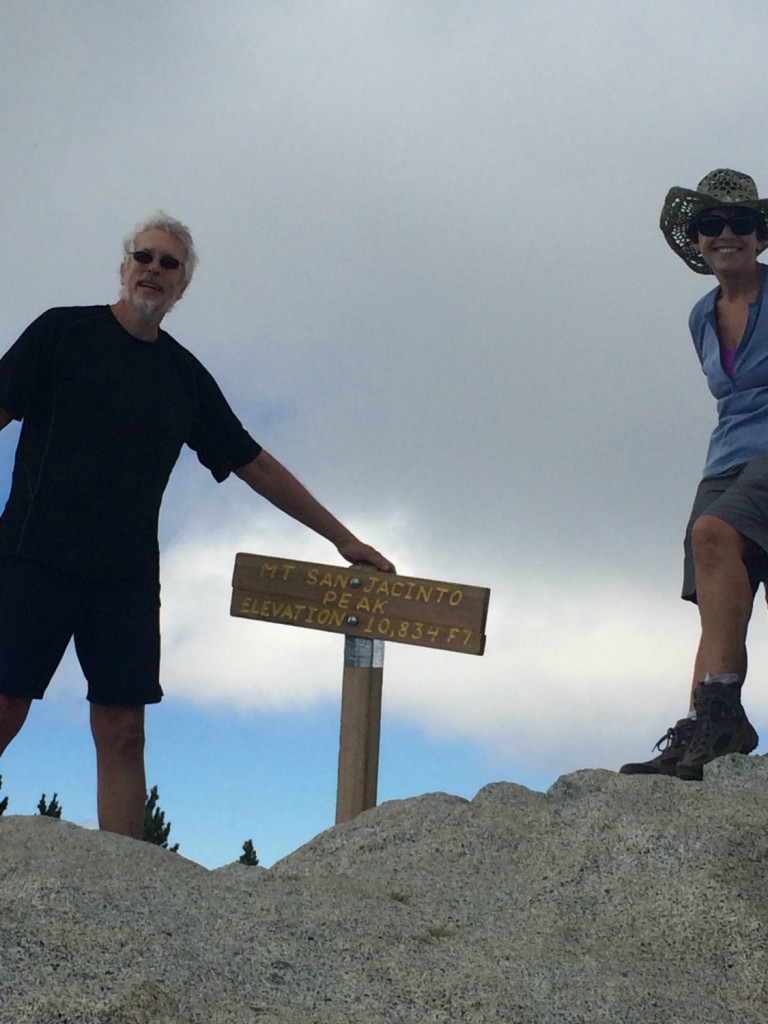 However, the views are fantastic. The peak is over 10,000′ higher than the valley, a perspective you don’t often get except from a plane. 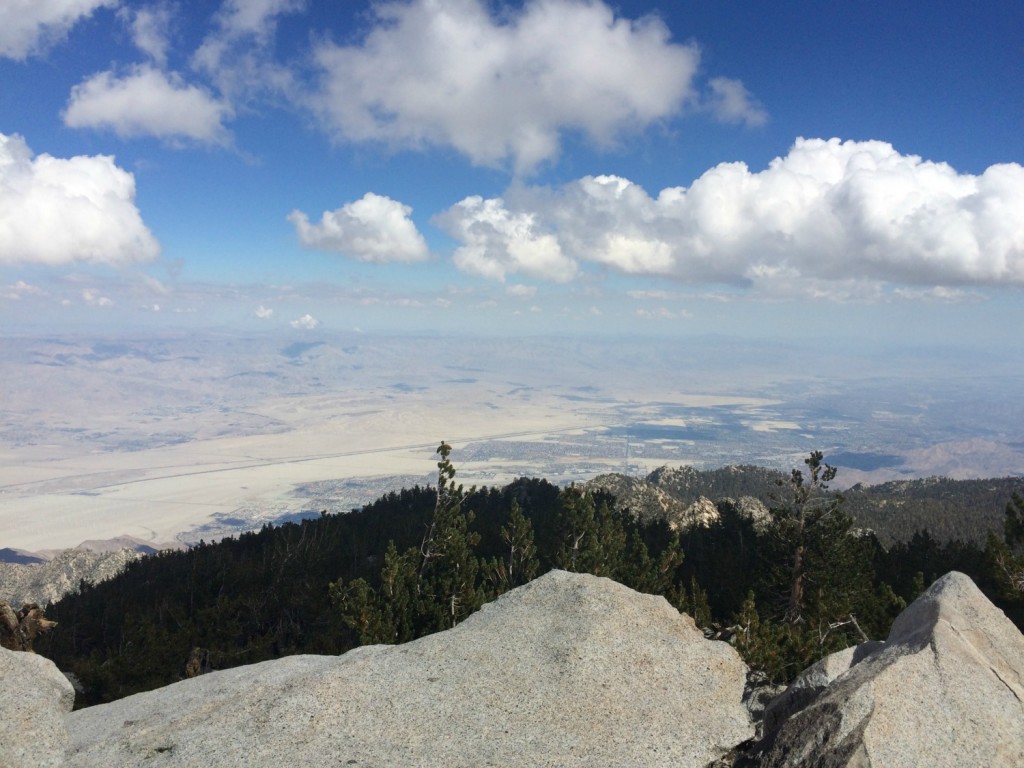 Friday, we headed 25 miles east from Indio to Joshua Tree National Park. We’d been advised (by folks we met on the summit of San Jacinto!) to start on the south end by I10, and drive across the park to experience the changes in the terrain and ecosystems. You start in the Sonoran Desert zone near I10, hot, with creosote bushes as the dominant flora on the valley floors. The road crosses the Pinto Flat and begins to climb. As it gets higher and cooler, you pass into the Mojave Desert zone, and the vegetation starts to change, with the eponymous Joshua Tree (a species of yucca) as the indicator species.

There is a huge variety of plant life and varied topography in Joshua Tree NP, and the recommendation to drive across is a great one. We stopped at Key View, an overlook of the Coachella Valley from approximately 5000′. We hiked up Ryan Mountain, at 5400′ the highest in the park. Ryan Mountain is a stout 3 mile round trip hike, gaining about 1000′ from the trailhead, but it affords a 360 degree view.

Saturday, we said good-bye to the Coachella Valley, and headed up CA74 out of Palm Desert into the Santa Rosa mountains, through the Anza Valley, and to Temecula. The drive up CA74 is spectacular, as the road goes through so many hairpin turns you can’t count. If you drive this way, be sure to stop at the overlooks and marvel at the way the road winds back on itself. We arrived in Temecula around noon, and found that they were having a street festival and a massive traffic jam! We managed to get through and headed to the wine country. There are so many wineries clustered near Temecula, it’s amazing…at least 25 or so in just a few miles on Rancho California Road. We hardly knew where to start 😉 . Some are very big, and others are much more intimate. The first one we really liked was Weins, and if you go, I’d recommend it. Fantastic wines, and a very relaxing, friendly tasting room. We tried several others, but the first was the best! We ended our day at Thornton Winery for dinner and the Summer Horns concert. Our dinner table was in the center front of the dining area, but we’d hoped to be a bit closer to the stage. However, we realized that the owner’s table was next to ours, and we didn’t feel so bad 😉 . The concert was great, though the dinner itself was just average. They do have a Nebbiolo that was outstanding, though! 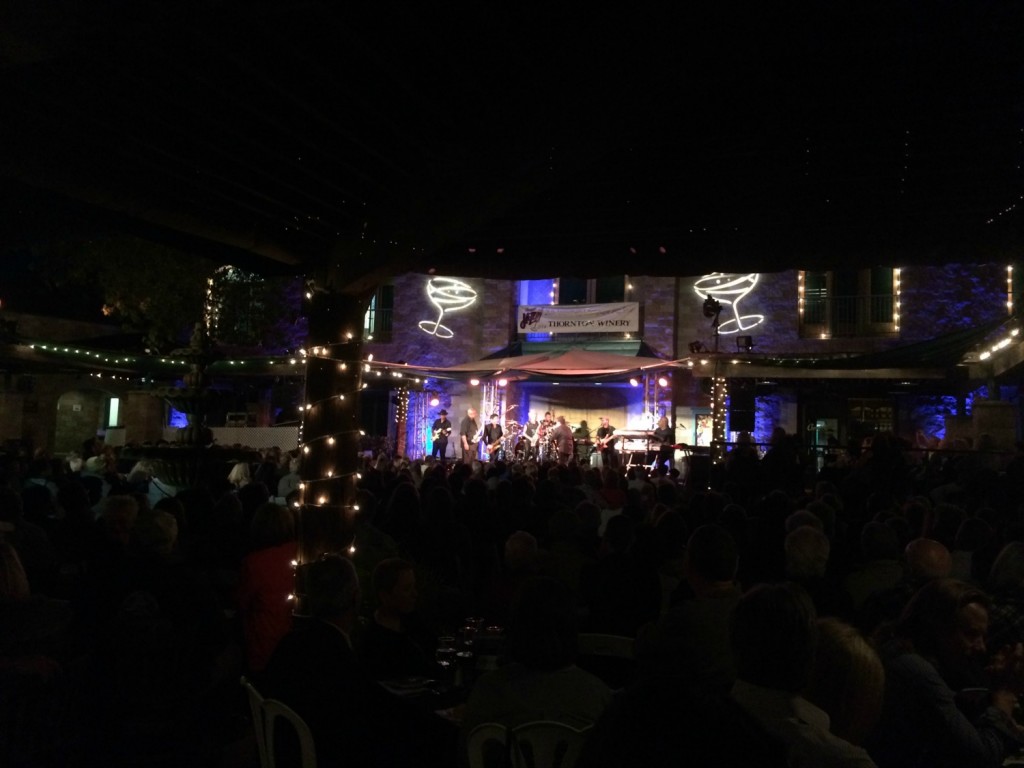 After the concert, we headed a bit up the interstate toward LA, found a motel and stayed a short night, before we headed to LAX to catch the return flight to RDU. A great trip, and learned a lot about this part of southern California.