I’ve really enjoyed my Samsung ARM Chromebook (XE303C12). I bought it in November 2012 for what was then the unheard-of price of $249, and have used it almost daily since then. Unlike some, I’ve experienced no hardware reliability issues, despite carrying it to work, and schlepping it around campus. Jan and I have a pair of old 1st gen iPads, and web surfing on those is increasingly problematic, but for email and reading, it’s still just fine. So, a solution…buy another Chromebook so I can have one and Jan can have one. So, I found a sale at Newegg on the Acer C710-2833, which has some things I like and some I’d prefer to be different, but it’s at a great price point…$187, shipped! It has a VGA out, Ethernet port, but the battery life is about 2/3 of the Samsung (but the battery is replaceable), and about 1/2 pound heavier. I’ll probably need to start carrying my charger to work, but I’ll appreciate the VGA out. Supposedly, it’s upgradeable to 4GB of RAM, and even more per postings on Chromebook Central. May have to watch for a sale on memory.

Anyway, it arrived today. Seems to be a well-built little computer, and like its Samsung brethren, will do virtually all of what I need to do.

Google is trying to get into the “device to large screen” streaming space and has just announced (on 7/24) the Chromecast. It’s a small HDMI widget for your TV (tho it apparently requires a power connector). It runs Chrome OS, it has some streaming apps (like Netflix) but the main draw is the ability to cast a stream from a Chrome browser tab (like AirPlay) from a device to the Chromecast via WiFi. That feature works with PC/Mac Chrome, Android, iOS, and Chrome OS (tho limited to the Pixel currently). So, one can apparently send any content in a browser tab to the Chromecast. Initial reviews have been positive, and with a $35 price point, it’s selling fast. First orders came with a 3 month Netflix credit (worth $24 of the $35, for new or existing customers). That’s been withdrawn now (“supplies were limited”) but since I ordered mine on the 24th, I think I get the credit. Should be an interesting addition to the set of streaming solutions, but I think it’s still very much a work in progress. I’ve already got 2 AppleTV’s and 2 Roku’s; we’ll see where the Chromecast fits in. I’ll report here when I get mine and have a chance to try it…should ship by 8/7, says the Play store.

I really like the “immersive full screen mode” that’s been enabled by default in the newest Chrome OS beta. I’d used full screen mode before but hadn’t set the flag for immersive mode. It provides a very nice way to switch tabs while retaining the full screen. You can easily switch tabs, while making it look like the whole screen belongs to the app/tab that you’ve selected. Correspondingly, you can float the mouse over the lower part of the screen and see the status line and running apps. This is the type of UI experience that while simple really adds to the experience. If you are not on the R29 beta 29.0.1547.32, you can enable this through “Chrome://flags” and search for “immersive”

Here’s a snapshot that shows the result on this blog. The thin white bars at the top are the tabs, and they load the “browser” view when you float over them… 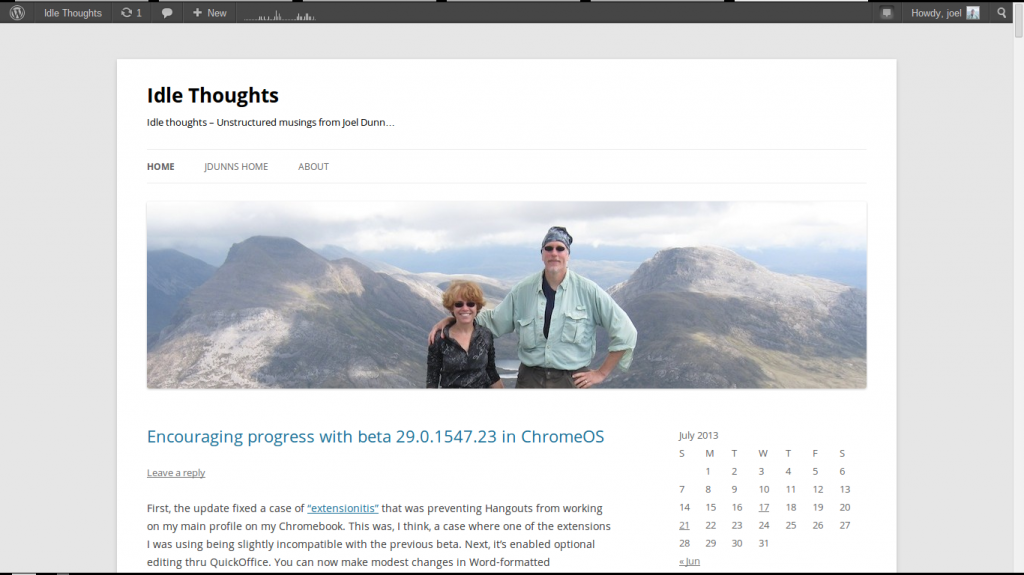 First, the update fixed a case of “extensionitis” that was preventing Hangouts from working on my main profile on my Chromebook. This was, I think, a case where one of the extensions I was using being slightly incompatible with the previous beta. Next, it’s enabled optional editing thru QuickOffice. You can now make modest changes in Word-formatted spreadsheets and documents, and that’s a big step forward with the platform. You have to enable this thru a flag on the Chrome://flags page. It also adds the ability to tweak display parameters, something that’s not an issue on a Chromebook (except with a secondary monitor) but is a big deal on a Chromebox. It has fixed bugs and improved stability, and it seems to me that it’s also dramatically improved memory usage (a big deal on a 2GB Chromebook). Here’s the list of release highlights from the ChromeOS blog:

I was pleased to see that browser access to iWork documents stored in iCloud has been enabled on my account. I’ve tried a few things in Pages, Numbers and Keynote. I was using my Chromebook to access my iWork documents stored in iCloud (it gives an error stating that the browser is not fully supported, but you can click OK and the results are good). I brought up a couple of presos in Keynote to edit and ran thru the presenter mode. Another file gave errors and wouldn’t load, but it was a pretty large one and this Chromebook has limited memory, so that was likely an issue. I looked at some documents in Pages and Numbers. I created a new presentation in Keynote on the Chromebook, saw that it was quickly visible on my iPhone in Keynote, and then ran the presentation from my phone. Very cool. The overall look and feel is very nice. I think that Apple may finally be addressing its long-standing issue of quality in browser-based cloud-hosted software. This just added a lot of value to the $30 I spent for the iOS versions of Pages, Numbers and Keynote. Nice work, Apple!

I picked this book up (virtually speaking, as I read most everything in the Kindle ecosystem) after hearing a reference to it in the Economist magazine. It’s been out since 2011 but I’d not heard about it until earlier this year. It’s a fascinating book, on a couple different levels, as a historical review and a speculation about the future.

First, Morris is an archaeologist and historian, who as he continued his post-graduate research, began to wonder about the dichotomy apparently posed by the “uniqueness” of ancient Greek society, yet its role in launching Western democracy. He takes the reader on a quick but comprehensive review of History 101 (aka Western Civilization) as well as an equally comprehensive and comparative tour through the Eastern equivalent. This is high readable, and will refresh your memory on all the history courses you took (or should have taken 😉 ). He covers ground that Jarred Diamond discussed in Guns, Germs and Steel and Collapse, with attribution, of course. Morris puts his “spin” on the various rises and falls with his societal development index, used as a metric to compare the developmental heights of various empires, kingdoms and the like. He postulates that society develops as the engines of sloth, fear and greed motivate various people to tinker, innovate and look for ways to make themselves safer and more comfortable. A key part of his thesis is that there are certain hard ceilings that it’s difficult for societies to break through, and if they don’t, they fall apart. When they do, it’s often catalyzed by geography, resources, and turning backwardness into an asset as groups leverage the technologies available in creative, lazy and greedy ways. Social development has been led by both Western and Eastern civilizations, but more often than not Western civilization has been in the vanguard. Morris takes pains to say that this is not due to “long term lock-in” or inherent abilities, as much as circumstance, geography, and other factors that have favored Western civilizations. The West has led, but the gap is rapidly closing, and this is where it gets interesting. Will China overtake the US? What will society look like then, and what would it actually mean?

After this exposition, the closing two chapters summarize why the West has been further along the social development scale, and speculate about the future. We’ve made it so far without an Asimov Nightfall moment (BTW, a great sci-fi story!). Society is set to move exponentially on the development index as information technology driven innovation and globalization changes everything. Will the Fermi paradox come to fruition (let’s hope not)? Will we reach the Kurzweil Singularity? Both are conveniently “due” in 2045 😉 . Will we have a dystopian society or Roddenberry’s Federation of Planets? My Panglossian nature makes me gravitate toward Roddenberry. As a technologist, I am fascinated by the impact of social technologies and other IT tools on everyday life. I reflect on my 30+ years working professionally with computers and their impact on our daily lives and I see the trajectory of change and am amazed. We go to work each day to build the future, without any real idea of the where we taking things.

So, will the East be more advanced than the West in 2100? What will it mean to be more advanced? What’s the meaning of geography in a fully interconnected world? Who’ll have the advantages to build upon? These are great questions. We’re building the airplane as it goes down the runway.

This is a great book, and I give it two “thumbs up!”