While Thanksgiving day was blustery, the weekend was warm and sunny, with light winds for both “Black Friday” and Saturday. The Dunns decided to head to the coast for the weekend on Thursday night. The plan was to have a family lunch at my sister Susan’s house in Swansboro on Saturday, and then head back to Chapel Hill so we could take Jeff to UNC-A. An added attraction was that Friday evening was the Swansboro Christmas Flotilla. We made plans to decorate the Sandbar Hopper to participate in the parade. We brought two holiday yard decorations, a cactus and a coyote, that have been used over the years to highlight the annual Chili Party. I mounted them on the boat, added some chili pepper lights that Susan had bought, hooked it all up to an inverter, and we were ready to go! 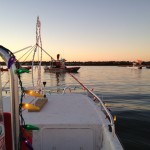 This was a small flotilla, as I found out at the Captain’s Breakfast on Friday…only about 15 boats, and the Chamber of Commerce was enthusiastic for any and all participants. We followed the Coast Guard as they headed west on the ICW towards Swansboro, as dusk came on. 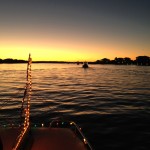 We soon realized that we’d taken the “newbie” position, next to the “swan” which had a massive array of lights on a swan frame, charged by a generator, and a sound system blasting Elvis and “Blue Christmas.” Next year, we’ll lag behind a few positions 😉 . It was really a great time. There were many people on the docks as we passed through Cedar Point, and huge numbers on the bridges, docks and shore in downtown Swansboro. We made three turns through the darkened harbor before heading back to Island Harbor. 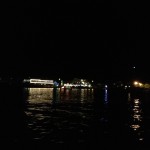 What great fun…until we got back to the marina and my Yukon wouldn’t start 🙁 . We used Susan’s RAV to pull the boat out and back to the house. The Yukon visited the Swansboro Chevy dealer via a tow truck. We pick it up tomorrow, the diagnosis being a failure of the “neutral safety switch.” Oh well!