I spent a great weekend at Natural Bridge Station, Virginia, chasing smallmouth bass on the Maury and James Rivers. My fishing buddy Sam and I met at my house at 7AM Friday the 22nd, piled my truck up with camping gear, fishing gear and boats, and headed toward the rivers. Since we couldn’t check in at the campground until after 1PM, we decided on floating first and then heading to camp. Since our campground was only about 5 miles from the Maury River, we headed to River Road. We stopped (making sure to avoid the no trespassing signs) downstream of the Gooseneck Dam, and put the boats together. It was blistering hot, and fortunately, we had a bit of shade. We carried the boats 50 feet down to the river, and then I drove the truck to a pullout downstream near the quarry. I pulled the bike out of the truck and zipped back up the River Road to the put-in. I locked the bike to a tree and we hit the water shortly after noon. We tried a few different flies, including poppers, but quickly settled on crayfish patterns. We had a great day, catching many bass like this: 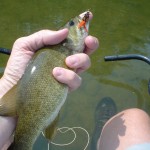 Fishing was as hot as the weather. We each caught at least 50 bass, with steady action all afternoon. Our best fish were 13″ or so and we caught a lot of spunky 9-10″ fish.

The Maury is a pretty float: 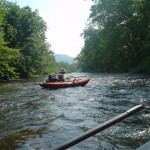 We guzzled water, gatorade and golden sodas to combat the heat, and I swam along with boat several times. We got off the water about 6PM, loaded up, and headed to the campground. More gatorade, water and golden sodas ensued! We set up camp and grilled steak, corn, zucchini and butternut squash, served along with rosemary bread & olive oil. Crashed into the tent about 10PM, with plans to float a section of the James on Saturday.

We tried the same brownish crayfish that had worked on the Maury the day before, but didn’t budge the fish. Tried poppers and other assorted streamers. Then, on a whim, Sam tried a tan crayfish and that was the ticket. Still didn’t catch any big ones, the best ones being about 12″. Caught a number of those, making for an enjoyable day. Overall not as many fish as Friday, but still 60 to 70 between the two of us. We also caught many redeyes – I pulled about 20 off one bank. We enjoyed the float, as even though it was hot, it seemed a few degrees cooler. 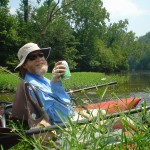 We had to rush the last mile or so. Rumbles of thunder lead to dark skies, wind and hints of rain as the storms got closer and closer. We rowed hard and got to the Narrow Passage landing just as the first big drops of rain started. We strapped the boats on, drove up to pick up the bike, and head to Natural Bridge in a driving rain. We sat in the truck for about 30 minutes while the rain passed. Another great dinner on the grill, and quickly to bed. We’d thought about heading north to the Wayside in Buena Vista for some wade fishing or heading down south for some trout on the way back, but we decided to roll on back to NC, content with a great weekend of fishing.